Who is Warren Buffett?

Who is Warren Buffett anyway? Warren Buffett is a name you often hear bandied about in the world of investing. Who is this guy and why is he often regarded as a guru and perhaps the greatest investor the world has ever known? Anyone serious about investing and wanting to be the best will attempt to track down the world’s best. I have done just that and in the following sections I will reveal more about Warren Buffett and his claim to fame in the extremely competitive field of investment. Known affectionately as the “Oracle of Omaha”, I would have to honestly say that he is a personal hero of mine. 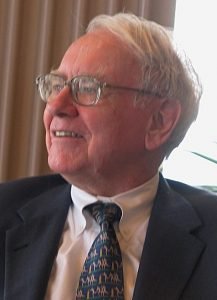 Warren Buffett was born on 30 August 1930, in Omaha, Nebraska, USA. His father worked as a stockbroker and served as a U.S. congressman. His mother was a stay-at-home mum. Buffett was the second of three children and the only boy. At an early age, he showed signs of his precocious desire for learning and in particular, his love for numbers and it wasn’t long at all before he had dabbled in the stock market.

Buffet as a young boy, would often visit his father’s stock brokerage shop and he enjoyed marking up the stock prices on the blackboard in the office. At just 11 years old it is acknowledged that he made his first investment. This involved buying three shares of ‘Cities Service Preferred’ at $US38 per share. He sold his shares at a small profit but later regretted the decision when apparently, Cities Service had skyrocketed to nearly $US200 a share. This indeed was an early lesson for him regarding his patience in investing. This early lesson learned would most definitely contribute to the forming of his strategic approach to investing.

Buffett attended the University of Pennsylvania at the early age of 16 to study business. After two years, he moved on to the University of Nebraska to finish his degree. He completed his degree at the age of 20 and at that stage, had already acquired nearly $US10,000 from his childhood businesses. His remarkable ability to earn money was already starting to be revealed.

In 1951 he received his master’s degree in economics from Columbia University, where he studied under economist Benjamin Graham and furthered his education at the New York Institute of Finance. Buffett was strongly Influenced by Graham’s 1949 book, ‘The Intelligent Investor’ and he ended up working for his mentor for two years as an analyst at Graham-Newman Corp.

Warren Buffett was an investment scholar and this book by Graham obviously had a substantial impact on him. He is later quoted as saying that Graham’s book was indeed “by far the best book about investing ever written”.

In 1956 Buffet formed the firm ‘Buffett Partnership Ltd.’ in his hometown of Omaha. Utilizing the techniques learned from Graham, he was successful in identifying undervalued companies. Value investing was a crucial element to Buffett’s investing strategy. One company that came to the focus of Buffett was the textile company, Berkshire Hathaway. He began accumulating stock in the early 1960s, and by 1965 he had taken over control of the company.

Buffett is famous for being a value investor. Value investors like Buffett aim to discover companies that are undervalued compared to their intrinsic value (in simple terms – a measure of what an asset is worth). An opportunity to buy at a discount exists when a company’s current market value is cheaper than its intrinsic value. There is no exact science behind estimating intrinsic value, however, investors will look at a variety of factors such as corporate governance and future earnings potential.

In 2008, Buffett was ranked by Forbes as the richest person in the world with an estimated net worth of approximately $62 billion (Source: Wikipedia).

As of August 2020, his approximate net worth is US$78.9 billion, making him the seventh-wealthiest person in the world.

Warren Buffett – What is he doing now?

Well, to shed further light on Buffett’s achievements, as further outlined in Wikpedia, in 1999, Buffett was named the top money manager of the Twentieth Century in a survey by the Carson Group, ahead of Peter Lynch and John Templeton. In 2007, he was listed among Time’s 100 Most Influential People in the world. In 2011, President Barack Obama awarded him the Presidential Medal of Freedom. Buffett, along with Bill Gates, was named the most influential global thinker in Foreign Policy’s 2010 report.

Warren Buffett, together with his famous off-sider, Charlie Munger, continue to head up Berkshire Hathaway. This is amazing as Warren is currently 89 years of age and Charlie is a youthful 96 years young.

In my eyes, perhaps even overshadowing his amazing investment successes, was in June 2006, when Buffett announced a new plan to give 83% of his wealth to the Bill & Melinda Gates Foundation. This was at the time, the largest charitable donation in history. What an amazing act of generosity.

Berkshire Hathaway’s current market capitalization is $US495 billion and it sits in position #7 in terms of index weight in the S&P 500.

Below is a snapshot taken on 23 August 2020 of the top 10 holdings, by value, of Berkshire Hathaway (source CNBC)

Your PROFITABLE ACTION STEPS this time around:

Stay safe, healthy and wise and most importantly of all, take ACTION.